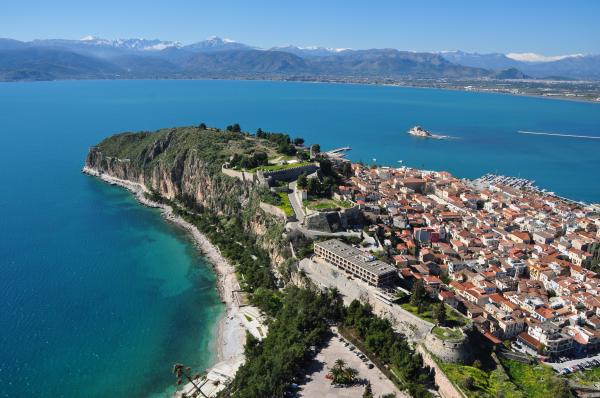 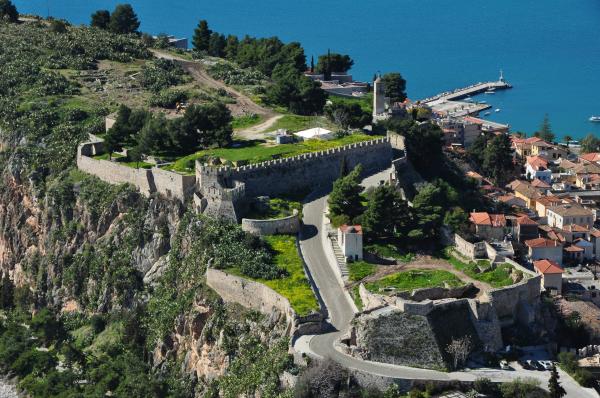 It is the oldest castle in Nafplio facing Bourtzi, right at the entrance of the Argoliko bay and connected to the mainland just north of the ravine Arvanitias. Akronafplia, the massive rock, was inhabited since prehistoric times. Standing on its summit, one can enjoy fantastic panoramic views. On the one side, one can admire the old city with its countless roofs, the hundred year old trees, the bell towers of the churches and let’s not forget the unique Bourtzi standing in the middle of the harbor. And on the other side, one can enjoy the enchanting view of the Gulf of Nafplio, the fig trees growing on the cliffs, and not to mention the beaches of Arvanitia that lie at the foot of the imposing Palamidi. The first fortifications date from the 7th Century BC, but today there is not much left of it. Work to strengthen the fortification was done during the Byzantine era in the late 12th century. The Franks also played a significant role in further expanding the facilities after 1210, when they conquered the city of Nafplio. The most important architectural works, which are well preserved until today, were made later during the first Venetian occupation (1389-1540) by the two engineers Pasqualligo and Gambello. It was then that the castle of Toroni was built at the eastern end of the peninsula. In 1702, during the second Venetian domination, renovation work began on the castle. Five cannons of the same size were added to reinforce its defense. To this day, they are known under the name -pente adelfia-  -five brothers-. It is believed that the fort was connected to Palamidi by a secret passage. Acronafplia was used as a defensive fortress until the Greek revolution. Kapodistrias established a military hospital there. It also served as a prison and during the time of Georgiou I, Akronafplia was used as barracks.