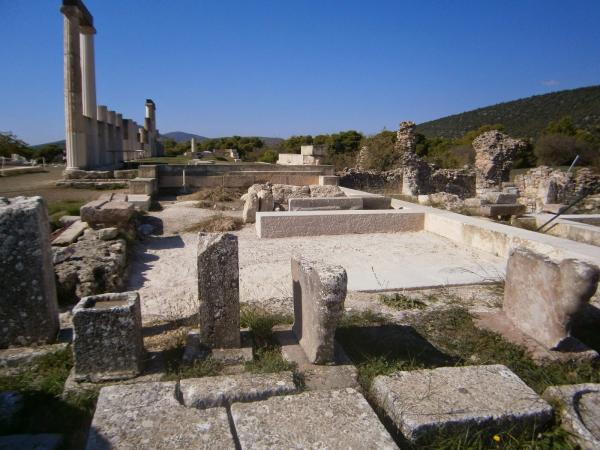 Galen, the famous physician of the 2nd century AD, said that patients should monitor performances. -The Drama began as the science around 1960, there was already archaiotita-. One Listens Professor Claus Lambrinoudakis develop his vision of Epidaurus and brings to mind a new destination, the center of a new international network of medical and spa tourism, an archaeological hyperlocal which converge medical students from around the world, scientists conferences, herbalists in ancient plants and visitors will follow the paths of evolution from the magic medicine as medicine as a science in the early centuries after Christ. This is a case study promoted through a network of synergies with the -Diazoma- President Stavros Benos and Professor Claus Lambrinoudakis (being born. Secretary to -Diazoma-).

Details about this exciting project was for about 20 minutes the Professor. B. Lambrinoudakis during Z -Diazomatos- General Assembly, held recently in Volos. What remains is a sense of the exciting expansion of the idea we have of Epidaurus through a completely modernized spirit synergies local and international networks.
-So Now known as Epidaurus Theatre-says Mr. B. Lambrinoudakis.

I refer to Little and Great Epidaurus Epidaurus, which means the small theater and a theater major. All others have been obliterated, while in fact the importance of this area is that it was there medical science. There began the magic medicine, which after nearly 2500 years, turned out to be medicine, and scientific-practical.

Currently in progress is the program enhancement of the site and the general cultural wealth of Epidaurus has caused synergy outside the Ministry of Culture, and the Ministry of Environment, School of Medicine, University of Athens, Municipality of Epidavros and certainly -Diazomatos -. It is striking how little the general public knows about the importance of Epidaurus as a medical center for the entire ancient Mediterranean after they had established around 200 Asclepiea from Spain as Cyrene and Asia Minor.

-First Heart of this Programme, explains Mr. B. Lambrinoudakis, -it is the highlight of this amazing story of the development of medicine through the ruins that survive from the edifices. The second pillar is the promotion through a new showroom history of this development and the findings that exist in space and with copies of the findings of other areas, which complement this development.

-The Third focus is to create a network Asclepeia, which sent the Asklepion of Epidaurus across the Mediterranean. We remind the Asclepion of Pergamon, one of the most important in the history of medicine (Galen taught there), which was founded by Asclepius at Epidaurus. And Asclepius of Athens, for which Sophocles helped write the devotional ymno-. Of particular importance is the Asklepion of Rome, which established this as a branch of Epidaurus (the island of the Tiber which was operated as a hospital today).

The idea is to create an international network with the assistance of the Medical School, which feed into actions that are in Asklepion of Epidaurus, such as the creation of conferences that will be relevant to medicine, as well as events to be associated with the theater. -The Theater not xechname- says Mrs. Claus Lambrinoudakis. -Was A very important aspect of worship and healing. The Soranus (2nd c. AD) said that those who had suffered from neurosis to watch tragedies and those suffering from melancholy to watch comedies. And Galen (2nd c. AD) attributed to Asclepius Directive that those who had mental disorders should be fun watching pageants and musical ekdiloseis-.

Interestingly organized outset the archaeological area around the temple and the museum will become another character. -The Existing entrance to the archaeological site is lathos- says Mr. B. Lambrinoudakis. -Mpainei One for theater and goes to the temple if they want and where guides lead him to there.

The first thing a visitor will see the preparations made by the ancient visitors. Particular position is water. -Not Only clearance. Is and contact that one has with the basic element of life. Nourishes us, sustains us while we clean. A statue-fountain in the 3rd century. BC, was in front of the temple of Asclepius. The water was coming in through the drilled base, ascended to the bronze statue came from the bottle he was holding in his hand, fell in the basin bottom and the bottom Kanalaki go in a bathroom that was next to Avaton. This was called Baths of Asklepios. Therefore he who bathed to get into avaton bathed in the essence of God. In Avaton was the function of egkoimisis-.

Mr. B. Lambrinoudakis highlights an important revelation: -The basement Dome (now restored) was a kind of cenotaph of Asclepius. The underground has the roof exactly on a level with the roof of the underground inviolate in which the patient-ekoimonto.

Important will be the changes in the character of the museum. -Ginetai A study for this new exhibition; explains Mr. B. Lambrinoudakis. -The Old museum will continue to exist but will exist only for the architecture. You watch first and magically obtain health, who was the ceremonial dinners: did sacrifice, cut pieces, calling God to attend, give him a bit (after receiving the priests) and supposedly so strengthens and they like God. It was the Theoxenia, ie xenismos, the hospitality of God.

From the earliest inscriptions we learn that they are all miracles, and the 2nd century AD is a standard recipe. In the 3rd century AD, now, even cured cancer. The offerings of the season seem impressive anatomic knowledge. A skull from Nafplio, Mycenaean era, showing gold teeth and a skull from Chios bears traces of trepanation.

Mr. B. Lambrinoudakis reminds us that -the emergence of biodiversity in the region is very important. -Your Remind the -Colossus of Maroussi- Miller, written around 1940, describes the landscape of Epidaurus, and how the soul finds peace of man in it. The municipality of Epidavros gives us a nice place, where you build a garden with plants of the region, so that the visitor to prepare mentally for what will akolouthisei-.